Good Blood, Bad Blood: Science, Nature, and the Myth of the Kallikaks by J. David Smith and Michael L. Wehmeyer

This is a beautiful book: an apple tree on the front cover, half with red apples and green leaves and half blasted black. It has many wonderful black and white illustrations of life at the School for the Feeble Minded. 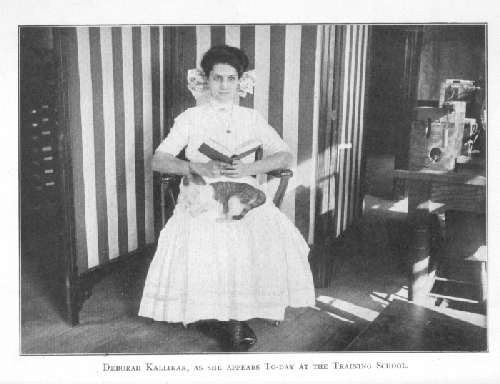 What caught me, though, was mention of the Kallikaks, the family of putative bad genes famous in the first half of the twentieth century. My father, a high school biology teacher used to tell me stories of the Jukes and the Kallikaks, families who were all retarded and/or criminal–clear examples of heredity in action.

My father wasn’t a eugenicist, but he had been educated in the years when the Kallikaks were presented as scientific evidence of hereditary degeneration. This book debunks the science and even the integrity of the social scientists who wanted so much to prove that people passed down traits, especially intelligence and morality, in the same clearly observable way as Mendel’s peas.

Emma wasn’t tortured or starved–she was even petted a little and given responsibilities and pleasures within her institution (see the photo above). She was, on the other hand, never given freedom, never made decisions for herself. She was good at music, crafts, writing friendly letters. She did various jobs like waitressing and child care. Was she a mental giant? Who could possibly know? Might she have had bad things happen to her in life had she been free? Why not? Bad things happen to many of us.

So the book first tells her story, and then gives a summary of the history of eugenics in the United States. There was an active movement in the U.S. to connect genes to intelligence to race–and some American publications were praised highly by Hitler himself. I don’t suppose we should really be surprised during the years of lynching of black people and fear of southern European immigrants that we also had a movement to cull out and isolate or sterilize or euthanize those who didn’t make the grade.

Other things of note: there was a failure to grasp that genetically controlled qualities are not one-to-one: that is, skin color, hair texture, and certainly something as complex as intelligence, are combinations of many genes plus the complexities of environment.

Henry Goddard, author of The Kallikak Family (1912)  and the central figure at the Vineland (NJ) Training School where Emma Wolverton was kept (originally “The New Jersey Home for the Education and Care of Feebleminded Children”), made up something vaguely scientific to support his pre-existing beliefs. Goddard’s book on the Kallikaks posited two genetic lines from a single revolutionary war soldier, one set of descendents normal and successful, one degenerate and feeble minded. Goddard’s facts were later discovered to have been misinterpreted– and made up.

Goddard was also deeply involved in intelligence testing, repeatedly “proving” that the majority of immigrants were feeble-minded! The categories my father learned from his biology textbooks were idiots, imbeciles, and morons– the morons a category created by Goddard and some others to cover those just below normal.
A handful of culturally and experientially derived questions, and people, like southern European immigrants and Emma Wolverton were labeled–and incarcerated–for life.

The book has lots more about the development of intelligence testing, and how prostitutes and women with illegitimate children were considered ipso facto feeble-minded. Goddard believed he and his employees could take one quick look and identify morons and other feebleminded.

We are now a hundred years past the height of the American eugenics movement, and I have to remind myself that a hundred years from now, if there is clean air left for us to breathe, we may be looking back at our present selves in horror.